Now We Are Six 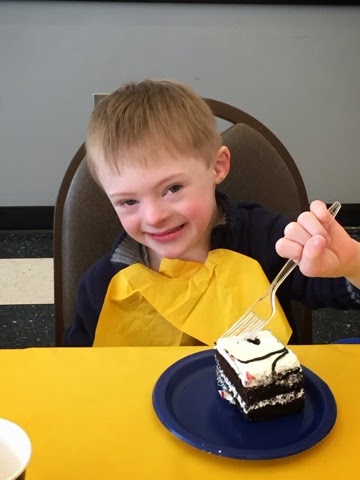 Merry Christmas to All! 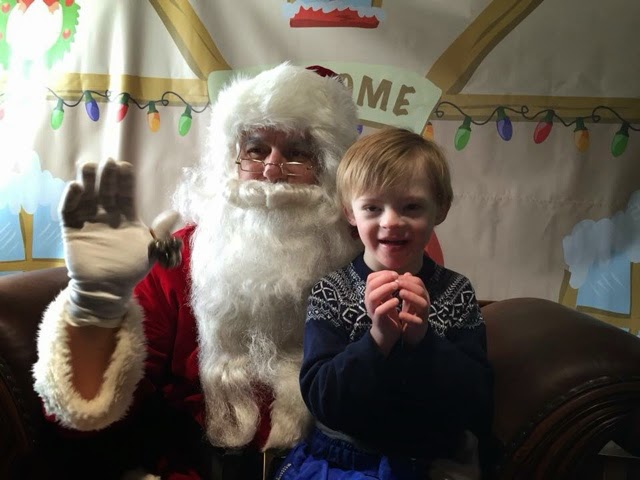 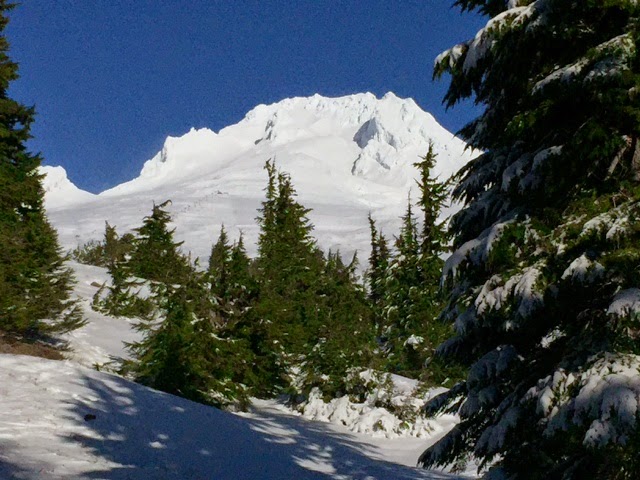 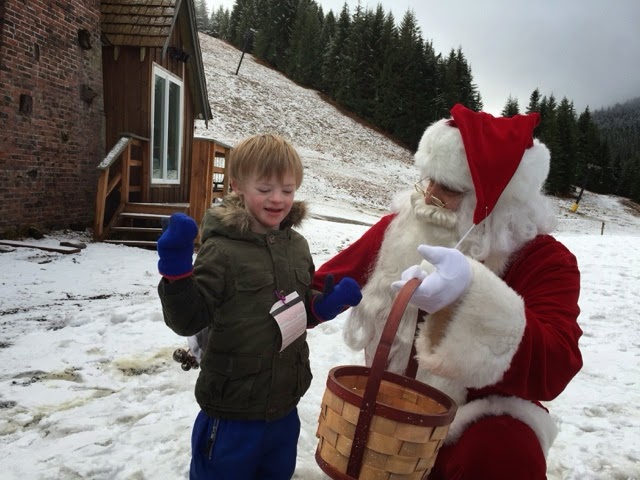 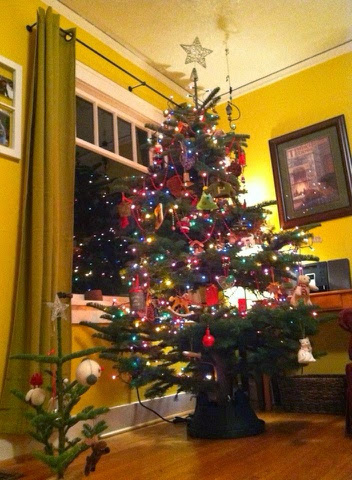 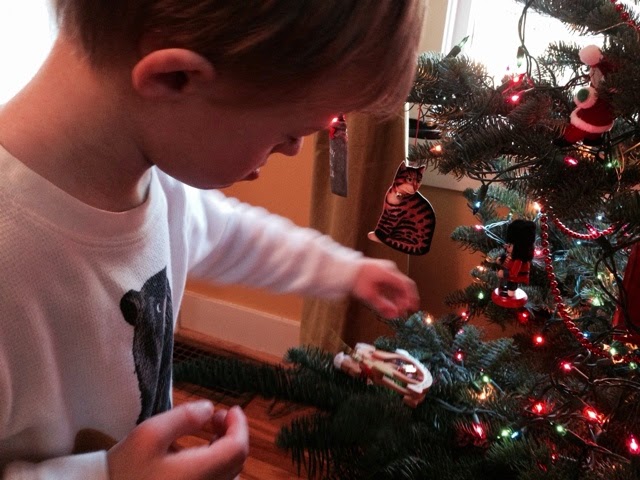 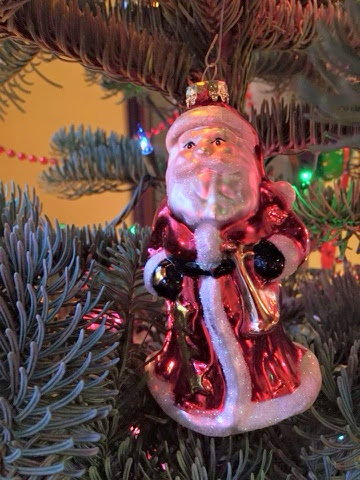 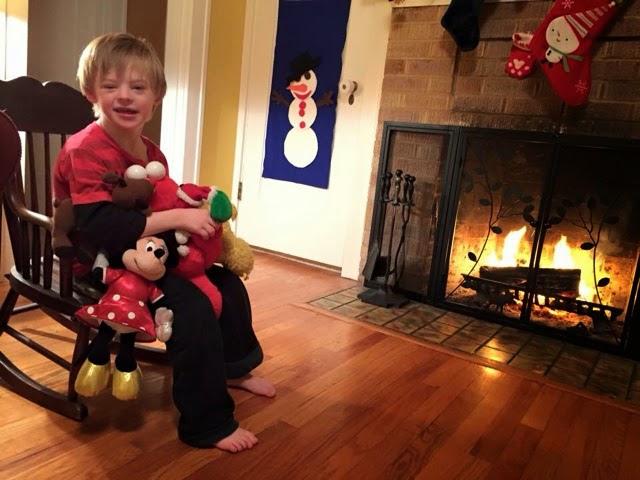 ...and to All a Good Night!
No comments:

No posts since October- a new record! Anthony's been doing great at school and we've been keeping busy with work, friends, and our early literacy non-profit, Portland Literacy Launch Pad. While I've not had much time for blogging here, I've updated the Literacy Launch Pad website with some new content, lots of cute pictures, and a blog post with a recap of our year and plans for 2015.

Another new feature on the website is a PayPal donation link. If you are able, please consider us in your year-end giving. Your tax-deductible donation will be very much appreciated and put to good use.

Our little learners thank you!

Guess who's having a birthday today?

What did he do yesterday to warm up for his birthday weekend?

It poured the night before and earlier that morning, but amazingly, the skies cleared just long enough for (muddy)  pumpkin gathering and hayrides.

Who do you think had more fun- the little kids or this big kid?

Happy Birthday, Daddy. Thanks for always showing us a good time. We love you so much!
1 comment:

Today marks the end of week #2 of kindergarten. There have been days we thought, "How the hell are we going to do this for the next 13 years?"  But we're all settling in now and it's not as daunting as it was at first.


I have to say that we have an absolutely amazing, supportive school community. The kids are so kind, and I think a big part of that is because of the tone set by Mrs. Aase and the principal. We were told the other kids were fighting over who got to hold Anthony's hand in line on Monday, and at pickup yesterday one little boy was so excited to tell me that he had helped Anthony put on his backpack. 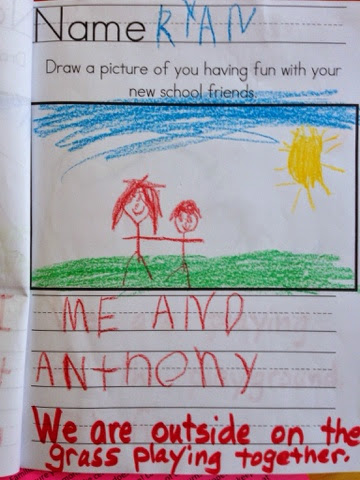 Some of Anthony's major accomplishments have been a 2-day stint as line leader and 4-day assignment as lunch bag monitor. The lunch bag monitors are in charge of carrying the bins holding everyone's lunch bags into the cafeteria. I'm not sure what a line leader does besides being first in line, but it sounds very important. 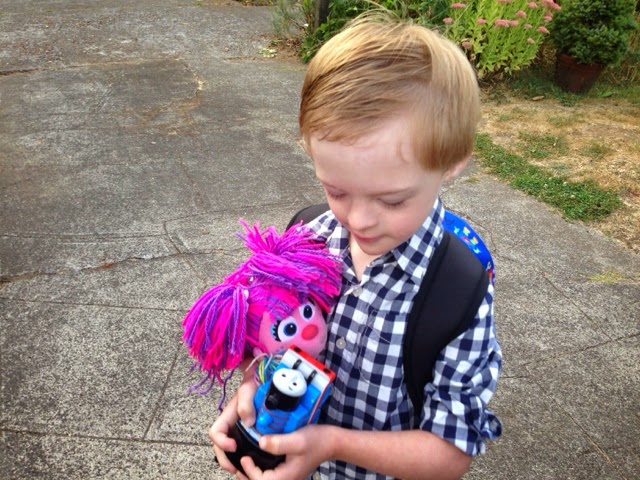 It hasn't been all rainbows and unicorns, though. Although I have no complaints about the school itself, we had some big problems related to the after-school child care program and their expectations for Anthony. With some conversations and more support, things were much better this week.

Without invading Anthony's privacy and dignity too much, I'll just share that he has not quite mastered the potty completely, and last week the principal showed she is not above doing what needs to be done- if you know what I'm saying. She is my hero.

There are sure to be more challenges as the school year progresses, but we're feeling more and more confident we can meet them together!

First Day of Kindergarten: So Far So Good!

The day finally arrived. We all managed to stay calm and even got out of the house in time to capture the required First Day of School Chalkboard Pinterest Photo. 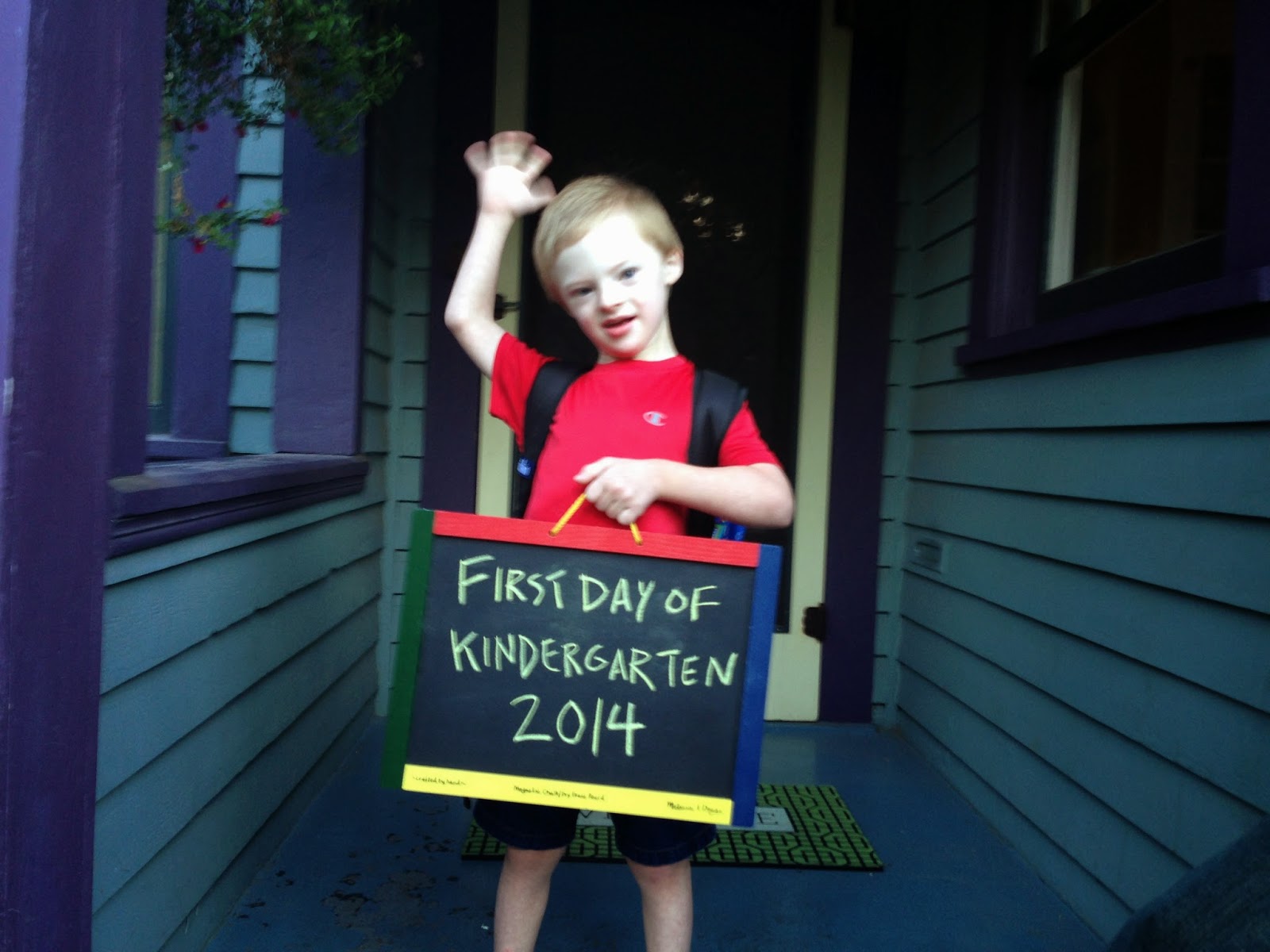 .
Anthony seemed really excited and proud. I'm so glad we were able to spend some time exploring the school over the summer, so he was very familiar with the environment by the time the big day arrived. 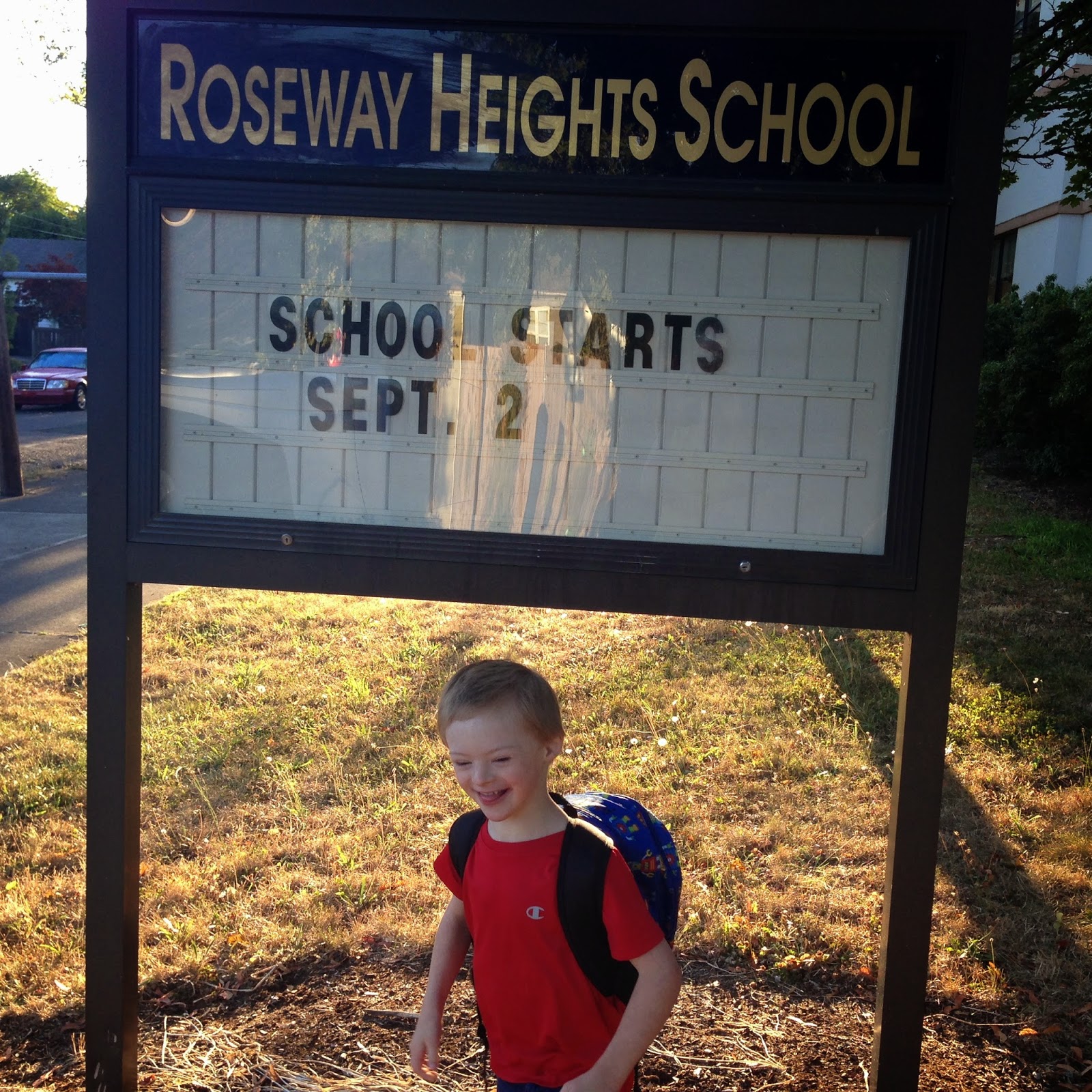 Backpack on, ready to go! 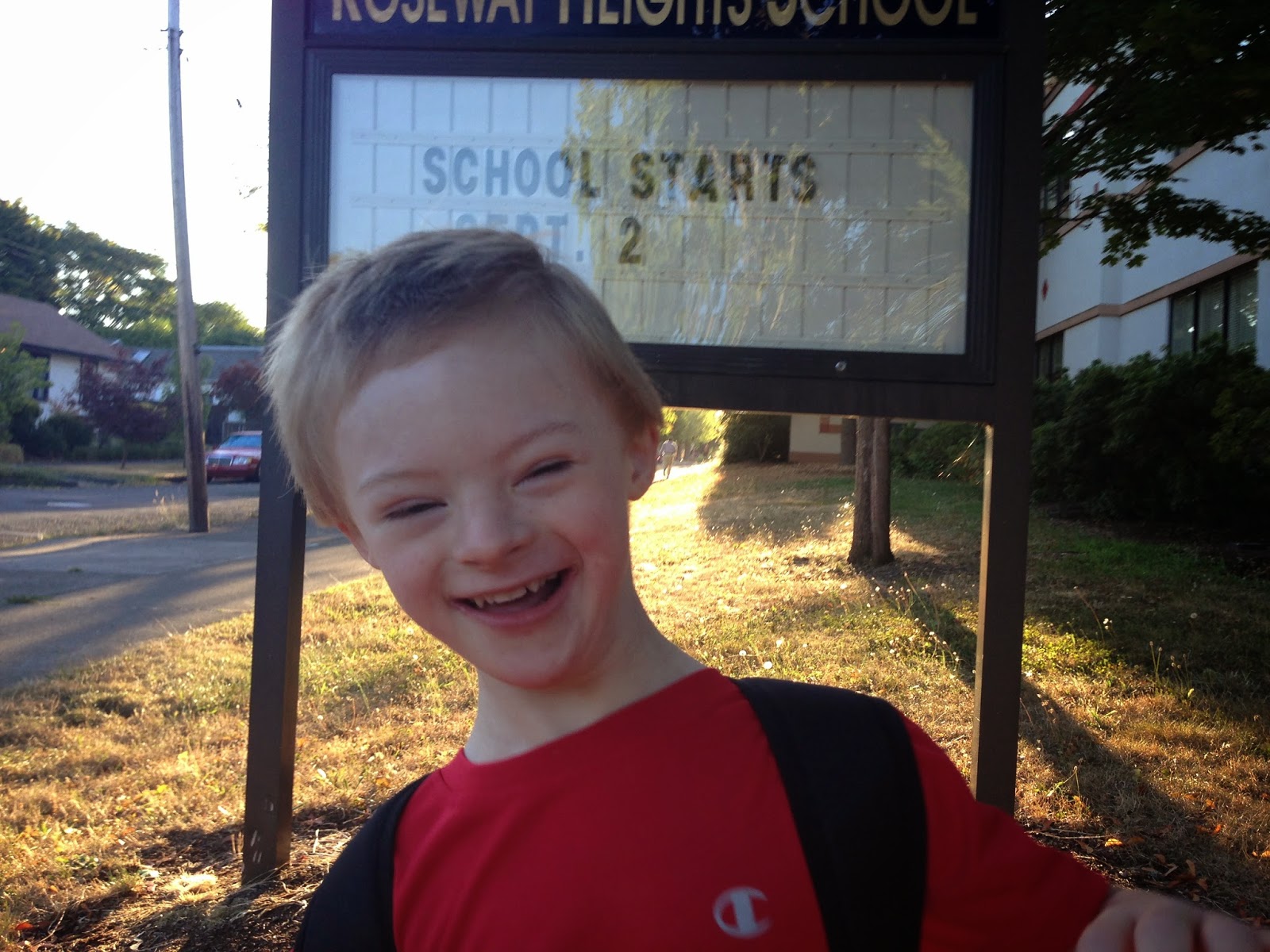 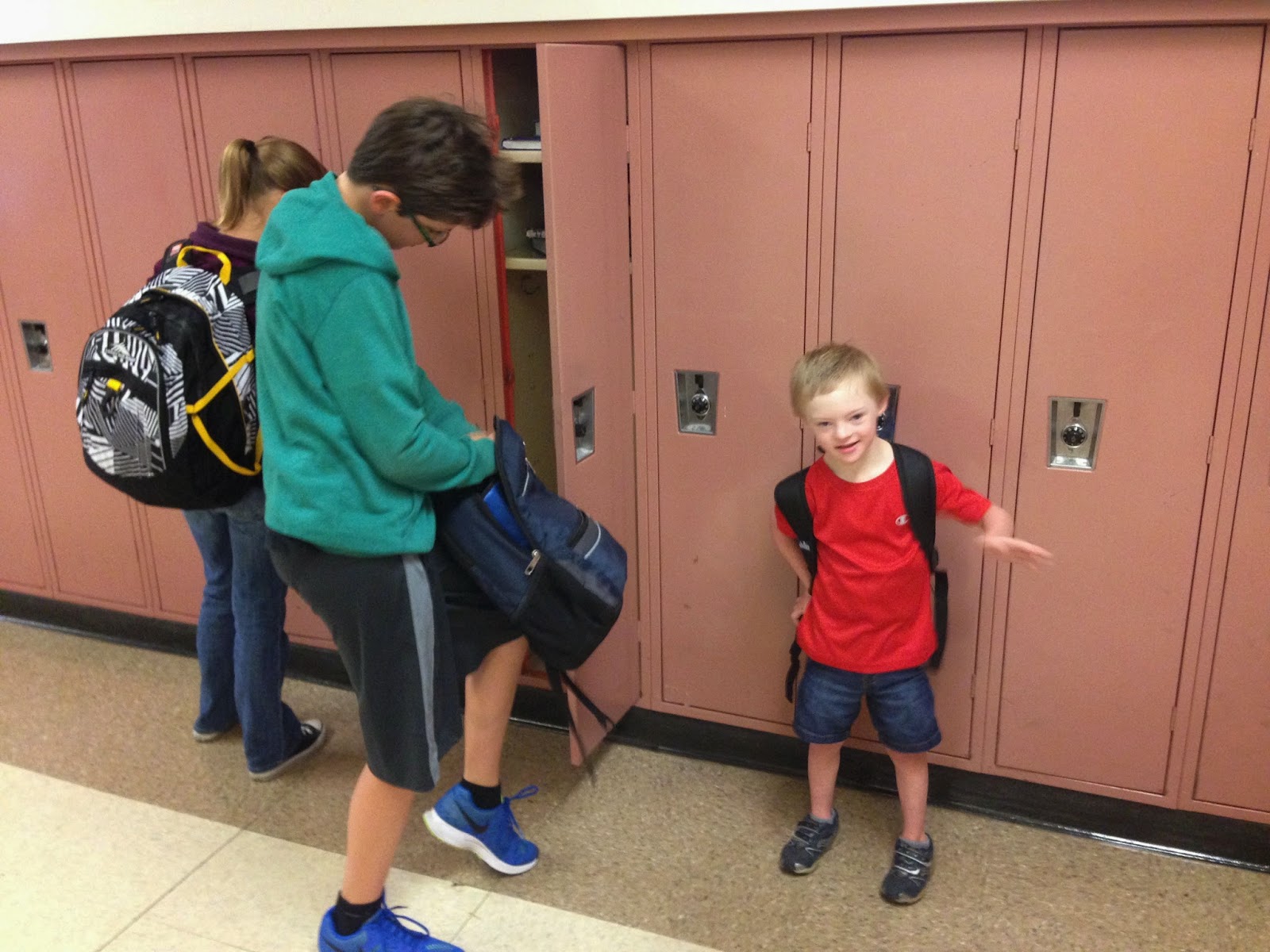 Just another PPS student. We were a little early and had to wait for the bell to ring. 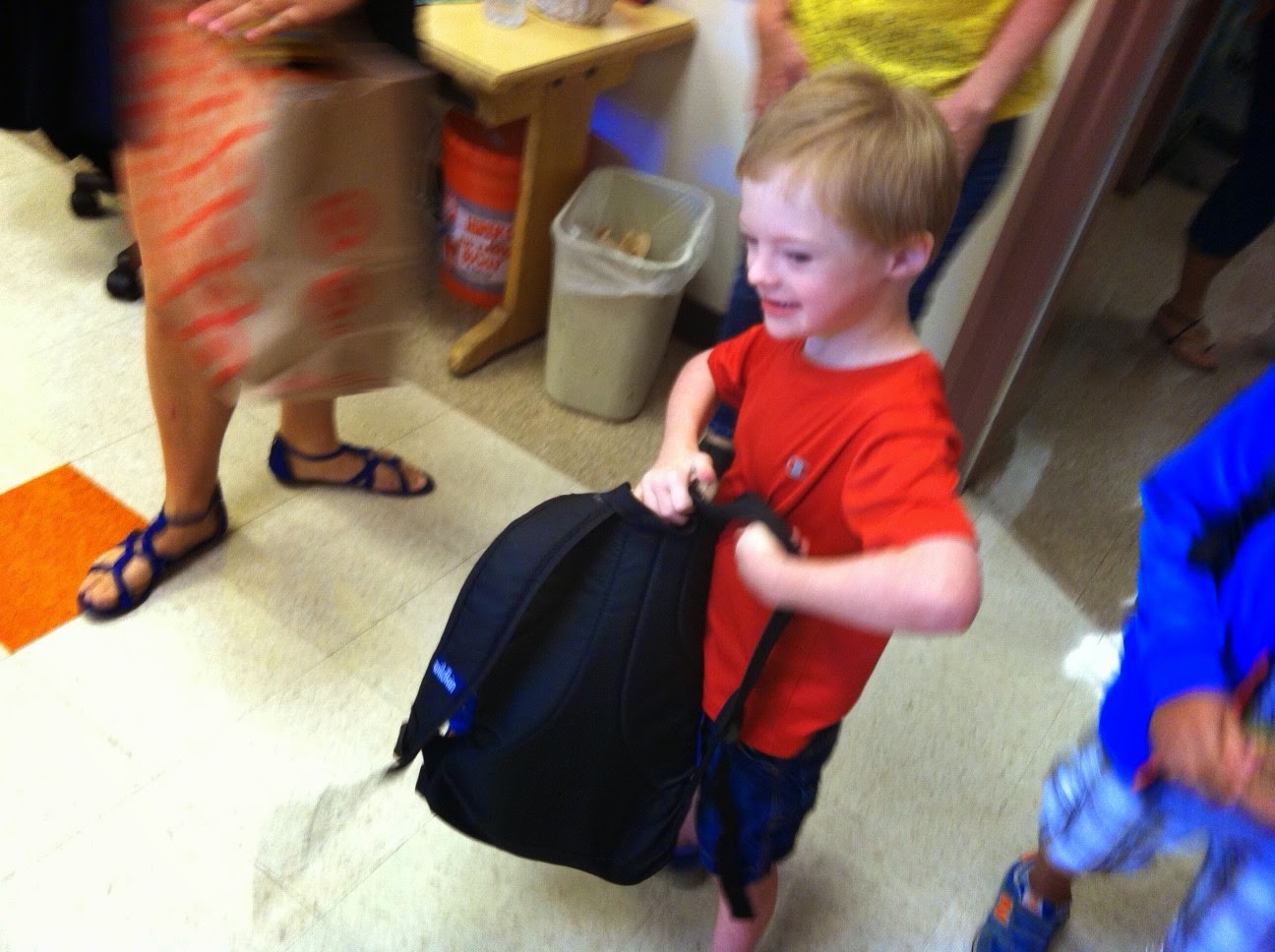 Finally it was time to find our class. All the kindergarten teachers were standing outside their rooms and greeted each little student as they came in. 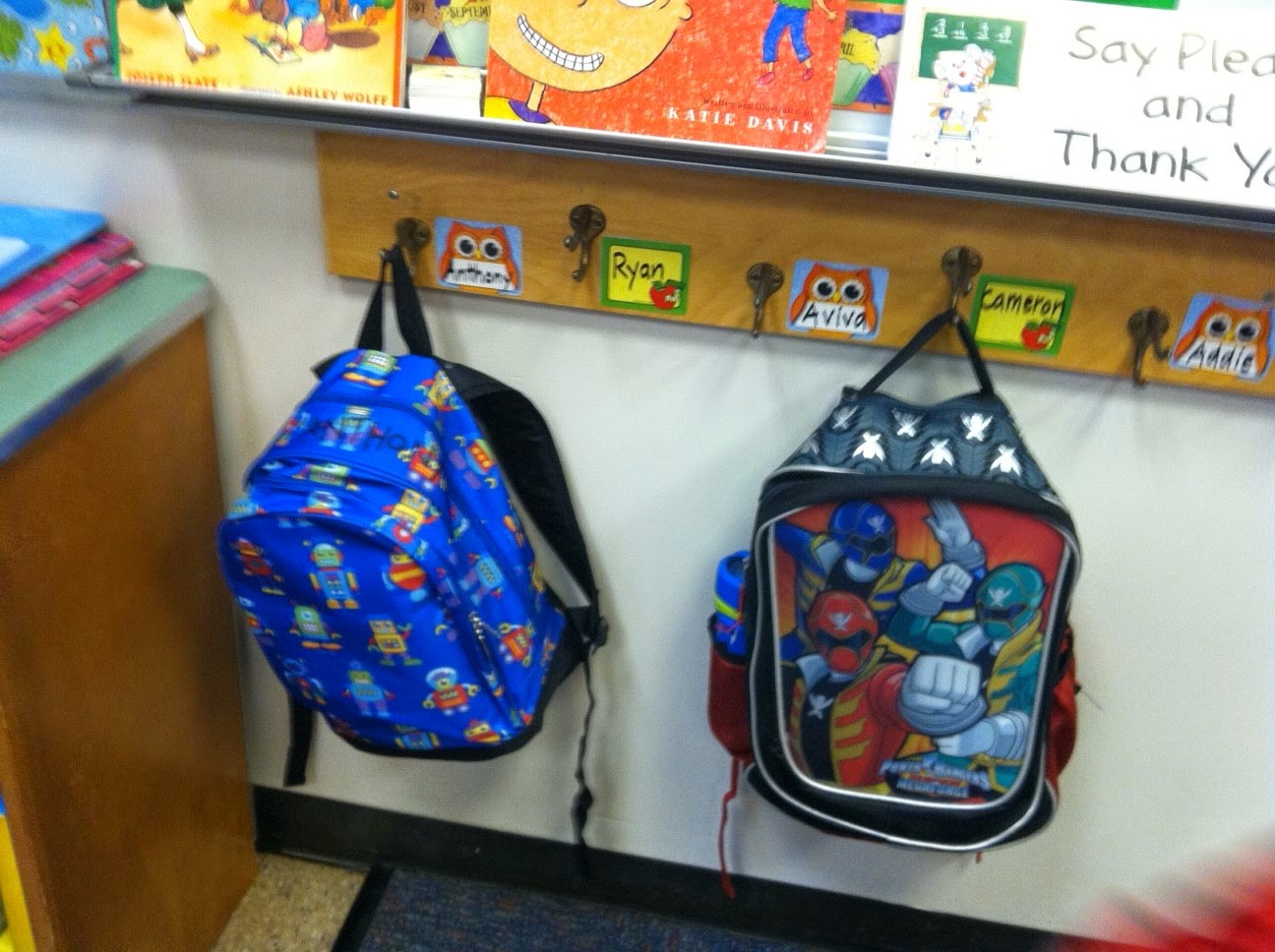 Mrs. Aase had the room so nice and personalized for her students. Each little one had a place to hang his backpack and a spot at one of the 3 tables. The class is smaller than we expected- only about 20 students. 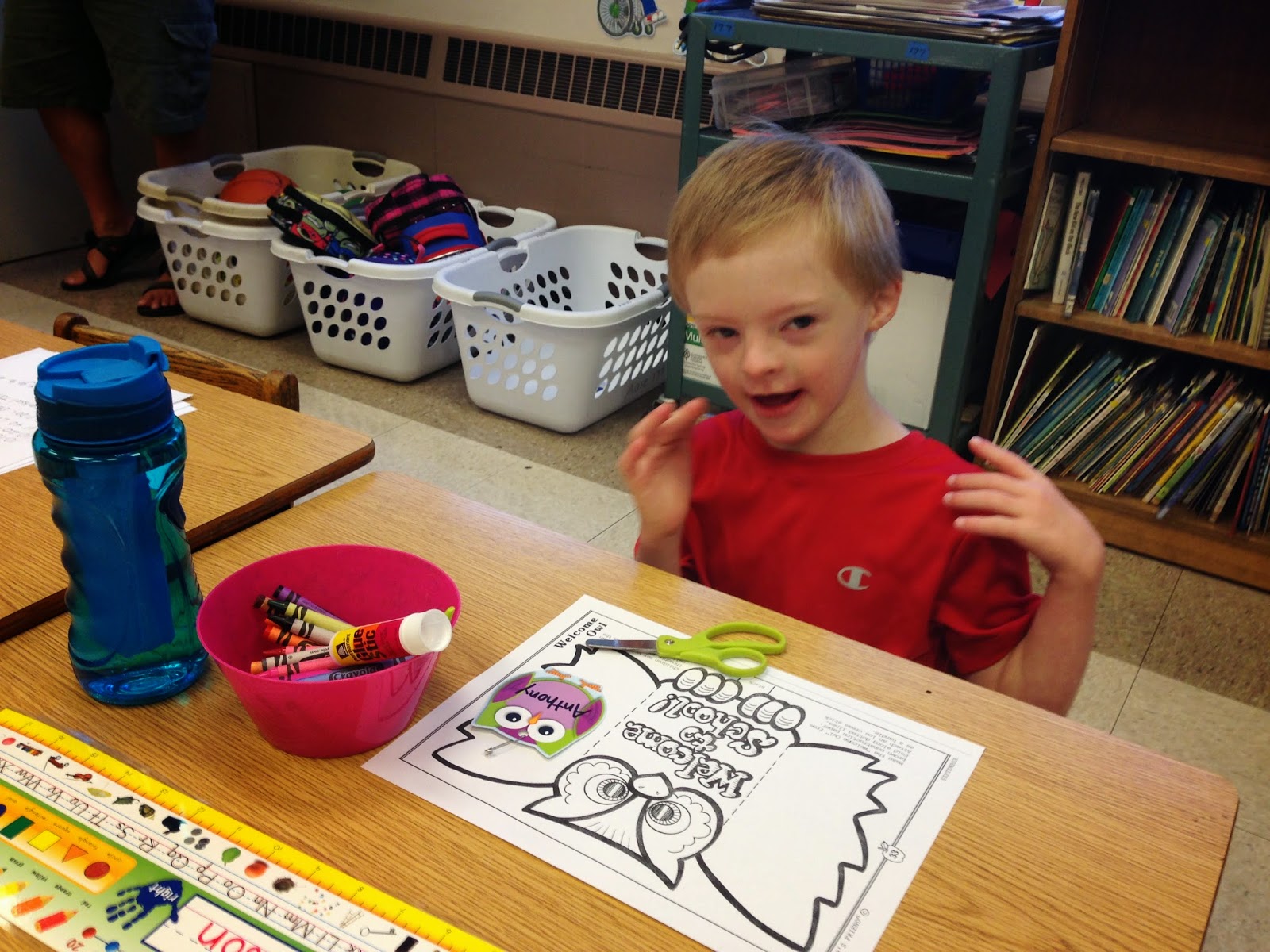 Anthony thought the whole thing was hilarious. He sat at his spot and colored his picture. He also investigated the scissors and glue stick immediately. 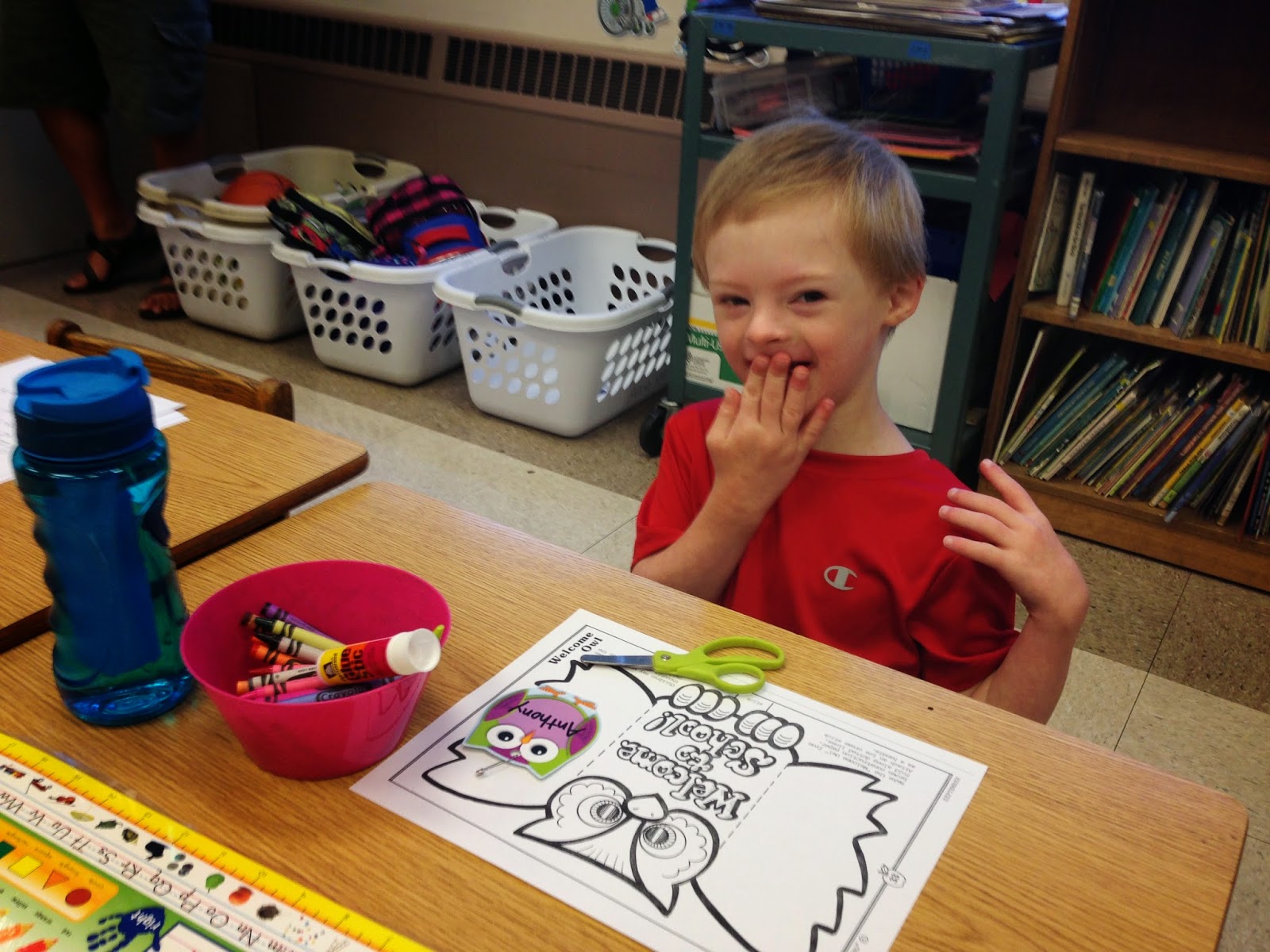 Mrs. Aase introduced Ms. Nicole as her assistant and didn't single Anthony out or say that she was there just for him. That was awesome. 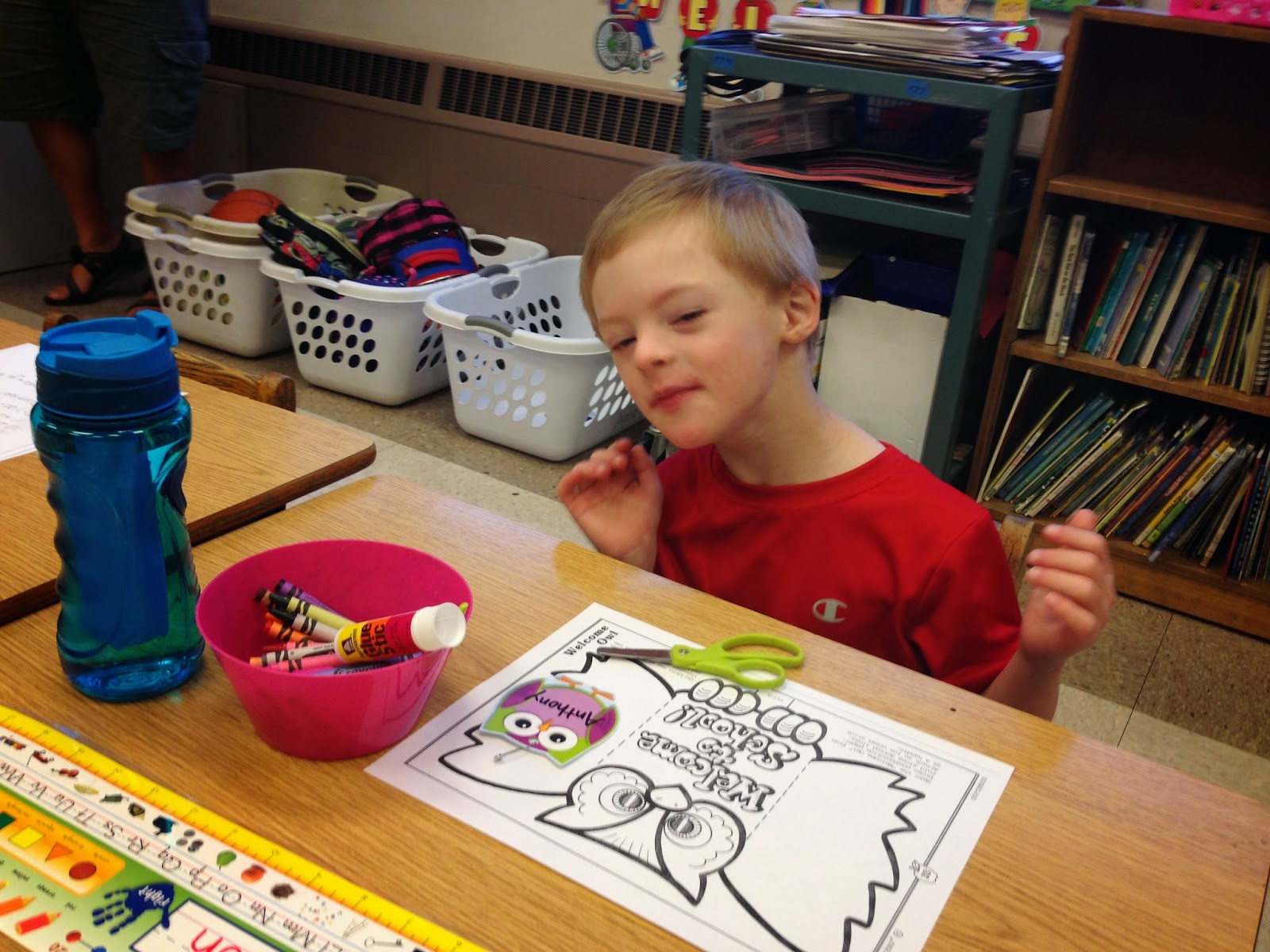 After all the kids had a chance to get settled, Mrs. Aase addressed the class and parents. She welcomed everyone and said that she was a little nervous-- was anyone else nervous too?

She asked the parents and kids if they had anything they wanted to say or ask. A few parents spoke, saying that their older kids had Mrs. Aase and loved her, or that they hoped all the kids would listen to what Mrs. Aase and Ms. Nicole said today. 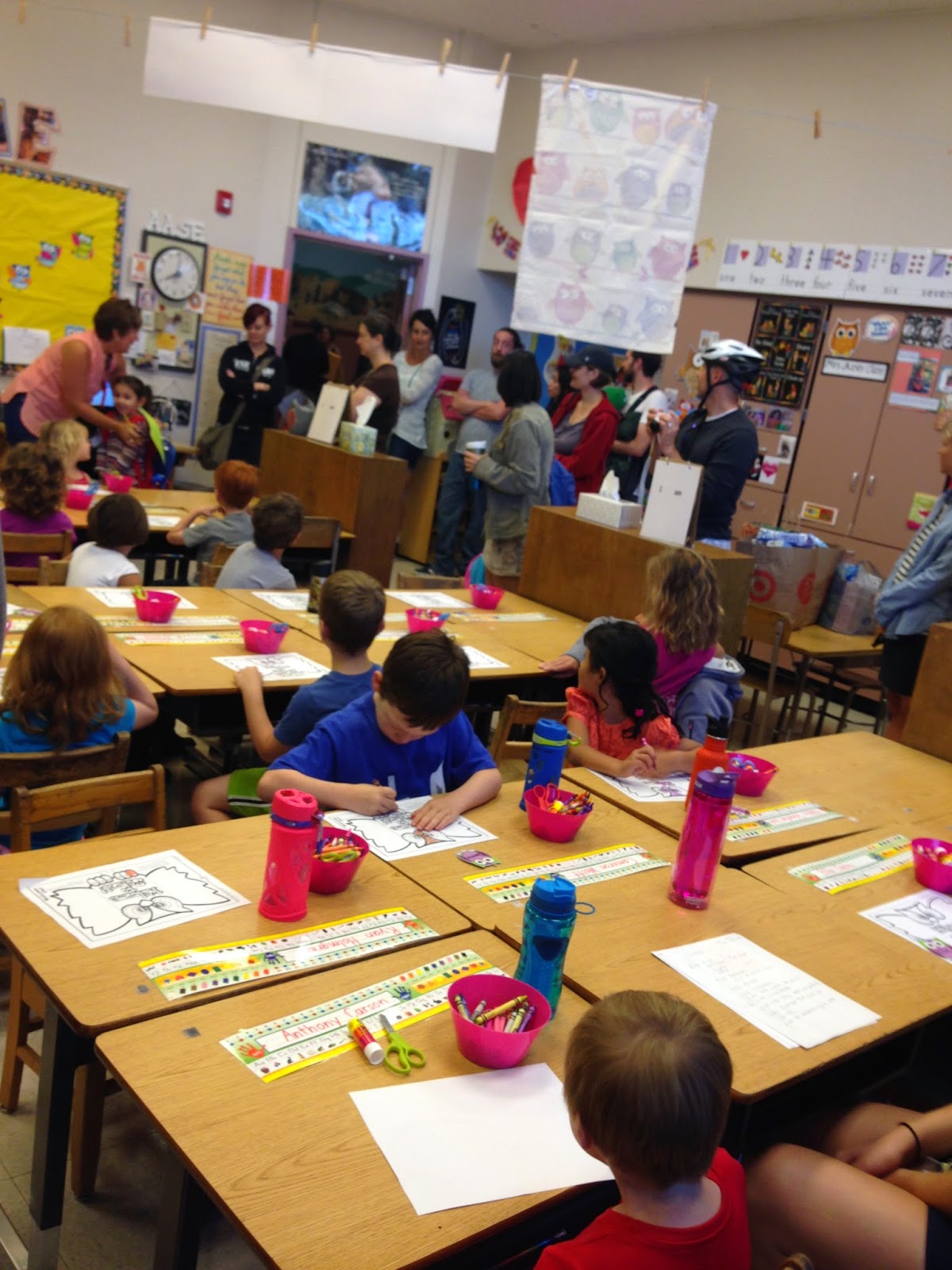 Then....Mrs. Aase announced that the Mommies and Daddies were going to leave now, but Mrs. Aase and Ms Nicole were there to help. The mood in the room shifted suddenly. A few kids burst into tears or reached out as their parents left.  Anthony gripped on to my leg like a monkey! But eventually we all extricated ourselves and walked out into the hallway, greeted by PTA members offering tissues. As we peeked in the classroom window, all the kids seemed calmed down. In all there were probably more tears from the parents than the kids.

Paul and I went out to breakfast and then spent the day at home. The time went so fast- before we knew it it was 2:00 and time for pickup. We joined the other parents waiting in the lobby and watched as each class came out, led by their teachers. It was amazing- they looked so orderly, holding a partner's hand and walking nicely just like they'd been doing it for years. We spotted Anthony bringing up the rear next to Ms. Nicole. They all marched into the gym and sat down on the floor. Then we were allowed in to pick up our kindergarteners and take them home.

Ms. Aase said he had a great day. The principal called us over to tell us that in fact, he needed Ms. Nicole's help less than some of the other kids in the class. In the morning, he participated and followed directions with the other kids, and even ate some of his lunch. By the afternoon, he had a harder time and didn't want to go to PE. Ms. Nicole said he was able to tell her that he was nervous. All in all it was a very successful start to the school year. We said our goodbyes and set off to enjoy our weekend.

Countdown to Kindergarten: Tomorrow's the Day!

Tomorrow Anthony begins his Portland Public Schools journey. The rest of the school started on Tuesday, but they ease the kindergarteners into it by starting them on a Friday. At first I thought that would be strange, but now I'm so glad it's that way. One day seems manageable. Five days in a row seems overwhelming!

But the backpack is packed, lunchbox is labeled, and our big boy is tucked in safe and sound. We've done our homework, so to speak, and now it's time to let it happen. 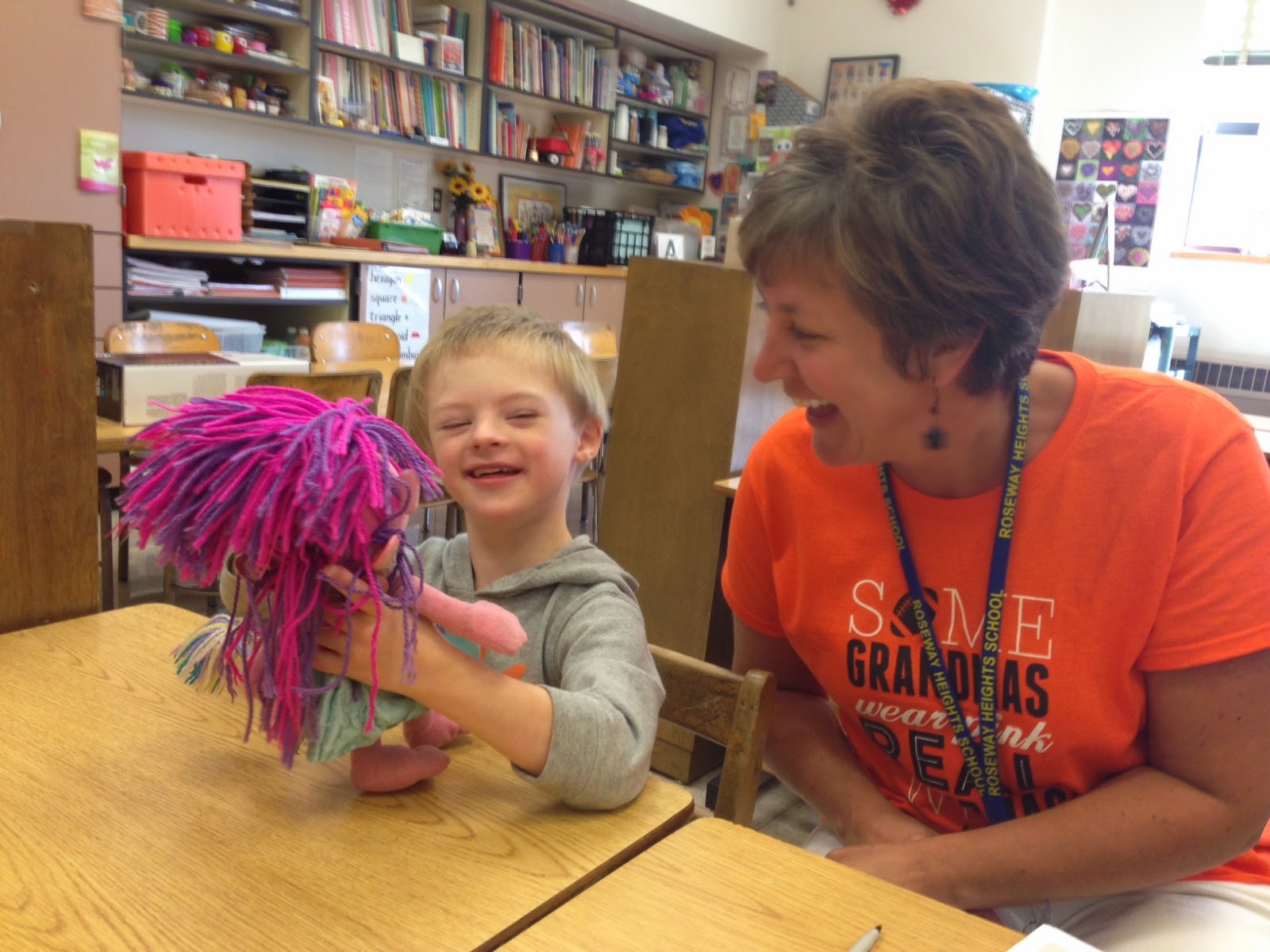 Here's Anthony at our meeting with his teacher Ms. Aase yesterday. We first met her at the kindergarten open house a week ago, and we loved her right away. She is so warm and kind. Her room is decorated with owls- it's pretty much impossible not to love her.

At the Open House, we also met Anthony's helper, Ms. Nicole.  I'm not sure what her official title is- paraprofessional? Student teacher?  She's a recent college grad, and being in Ms. Aase's room will be her first "real" job in teaching. We liked her right away too. When she told us she has taken two years of sign language, I just about fell over I was so thrilled. We were worried that no one would be able to understand Anthony's signs, and were still trying to come up with a good way to convey them, and then here she is.

Ms. Nicole made a visual schedule so that Anthony will know what to expect on the first day. 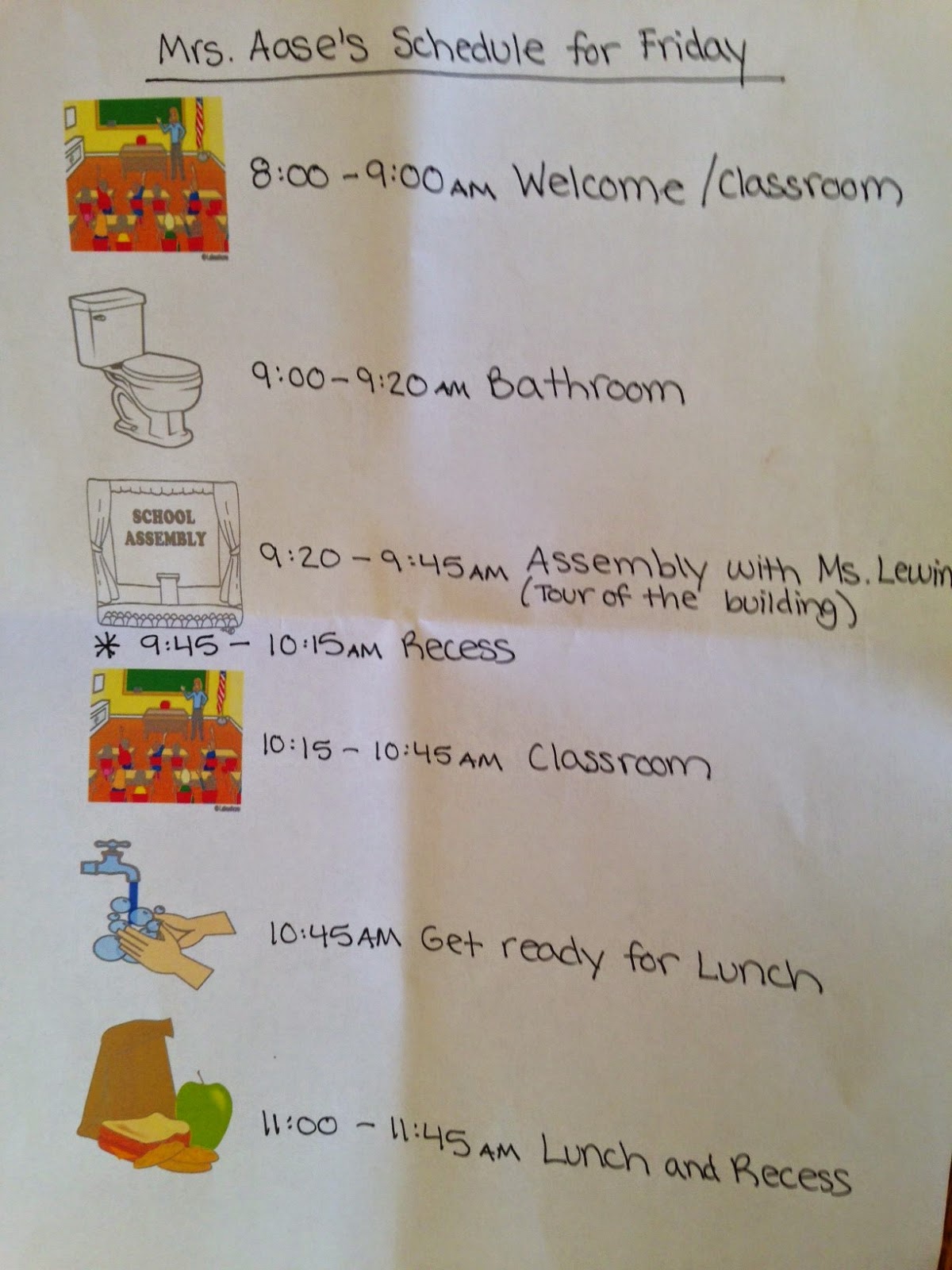 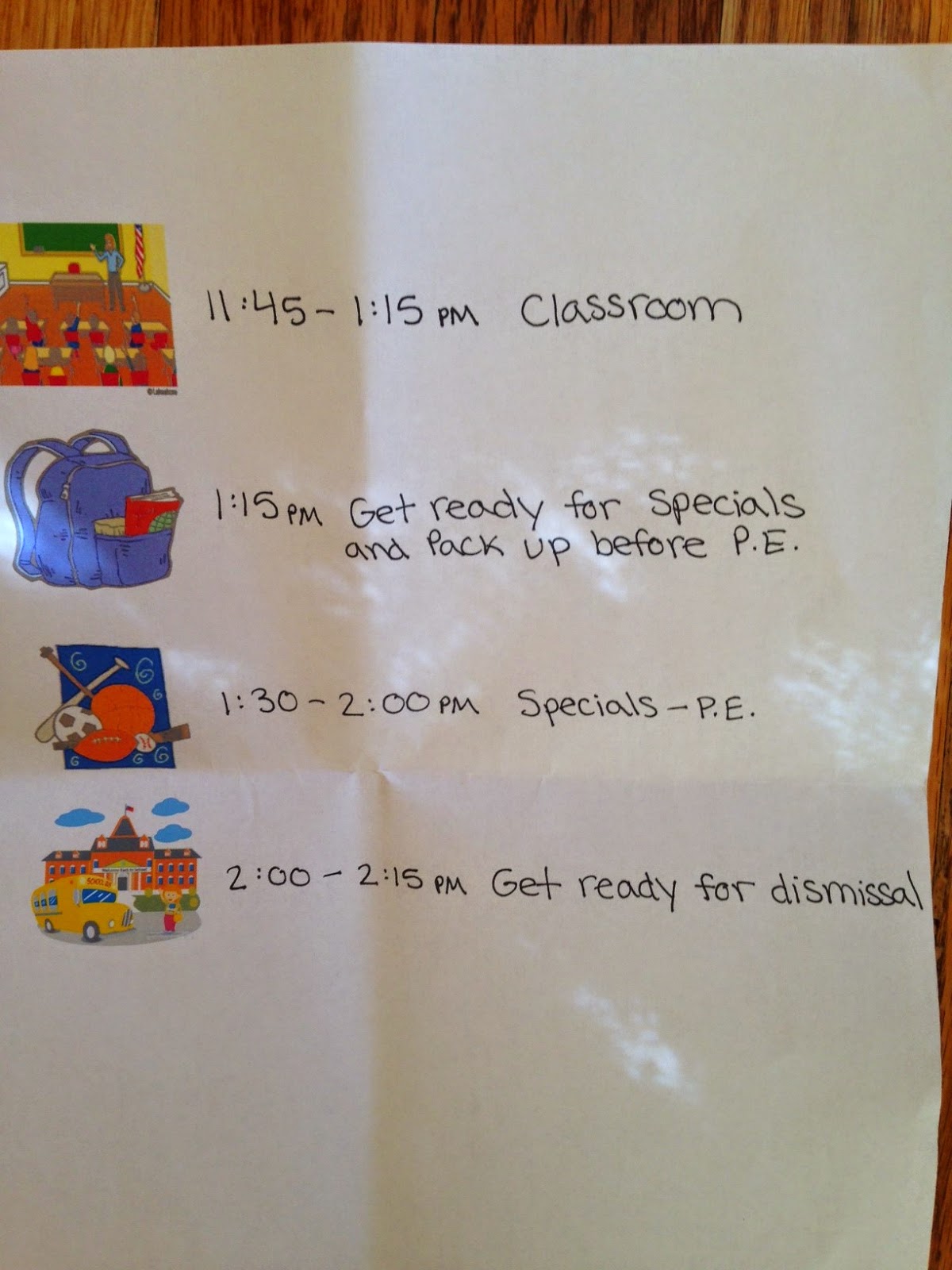 From what I can tell, kindergarten seems to involve a lot of "getting ready" to do things and also going to the bathroom.

Tomorrow Paul and I both have the day off from work, so after we drop Anthony off we'll have the whole day to be neurotic together. What should we do?

I hope all of our little friends near and far have a wonderful first day/week of school.
No comments: 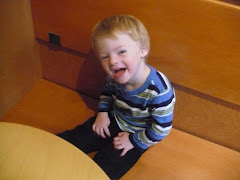 "Thanks for stopping by!"